Syndication Structures — What They Mean for YOU as a Passive Investor 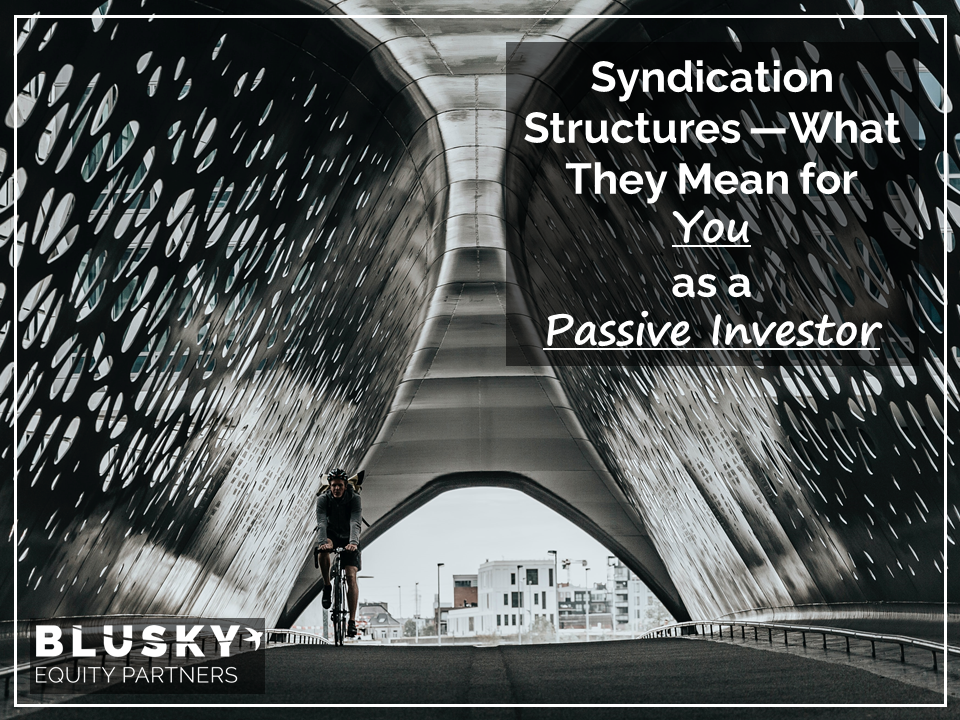 When considering deals to invest in as a real estate investor, the most essential step to take is establishing your investment goals.

What do you want these investments to do for your life? Are you working to build up passive income so it matches your salary (i.e., short-term need)?  Or are you investing to build up your retirement account, and have a good deal of time before retirement (i.e., long-term need)?

These questions, in addition to how much money and time you plan to invest in real estate, are very important in deciding which real estate deals are best for you.

As an investor in a real estate syndication, you’re giving up some overall control of the investment and pooling your money with a group of investors in a large piece of otherwise unaffordable property, like a 200-unit apartment complex. While you enjoy relief from the typical responsibilities and time commitment that being a landlord requires, you rely on the syndication’s deal structure to dictate how the returns are distributed.

So, what do you look for when exploring real estate syndications, and how do you know which deal structure is best?

This article will walk you through a key component of syndications — the deal structure — which dictates how the returns will be split between you (and the other limited partners) and the general partners (i.e., the sponsor team).

Related article: What are the Key Roles in a Real Estate Syndication?

Much like snowflakes, no two real estate syndication deals are the same.
Some deals offer higher returns coupled with higher risk, while others are
more conservative.

Syndications are structured differently based on the market, the asset type, the preferences of the general partners, the location and condition of the asset, and
so much more.

Before you invest, you should ensure the deal structure aligns with the investment goals you’ve set.

There are two common real estate syndication structures: the Straight Split and the Waterfall.

As the name suggests, this type of deal splits all returns (both cash flow and profits from the sale) based on a set, straight percentage.

For example, if a deal uses an 80/20 split, 80% of all returns (both cash flow distributions during the holding period and the profits when the property is sold) are shared among the limited partners (i.e., passive investors) based on the amount of their investment. The other 20% is paid to the general partners (i.e., the deal sponsors), who split it according to their own agreement.

No matter what amount the property returns in profits, 80% of them are distributed to the passive investors and 20% to the sponsors.

Another common structure for real estate syndications is the use of a preferred return, also called a “pref” or a waterfall.

In this type of deal, the passive investors get 100% of a set percentage of the returns (we’ll use 7% for example), and the general partners only receive distributions if the returns are above that percentage. 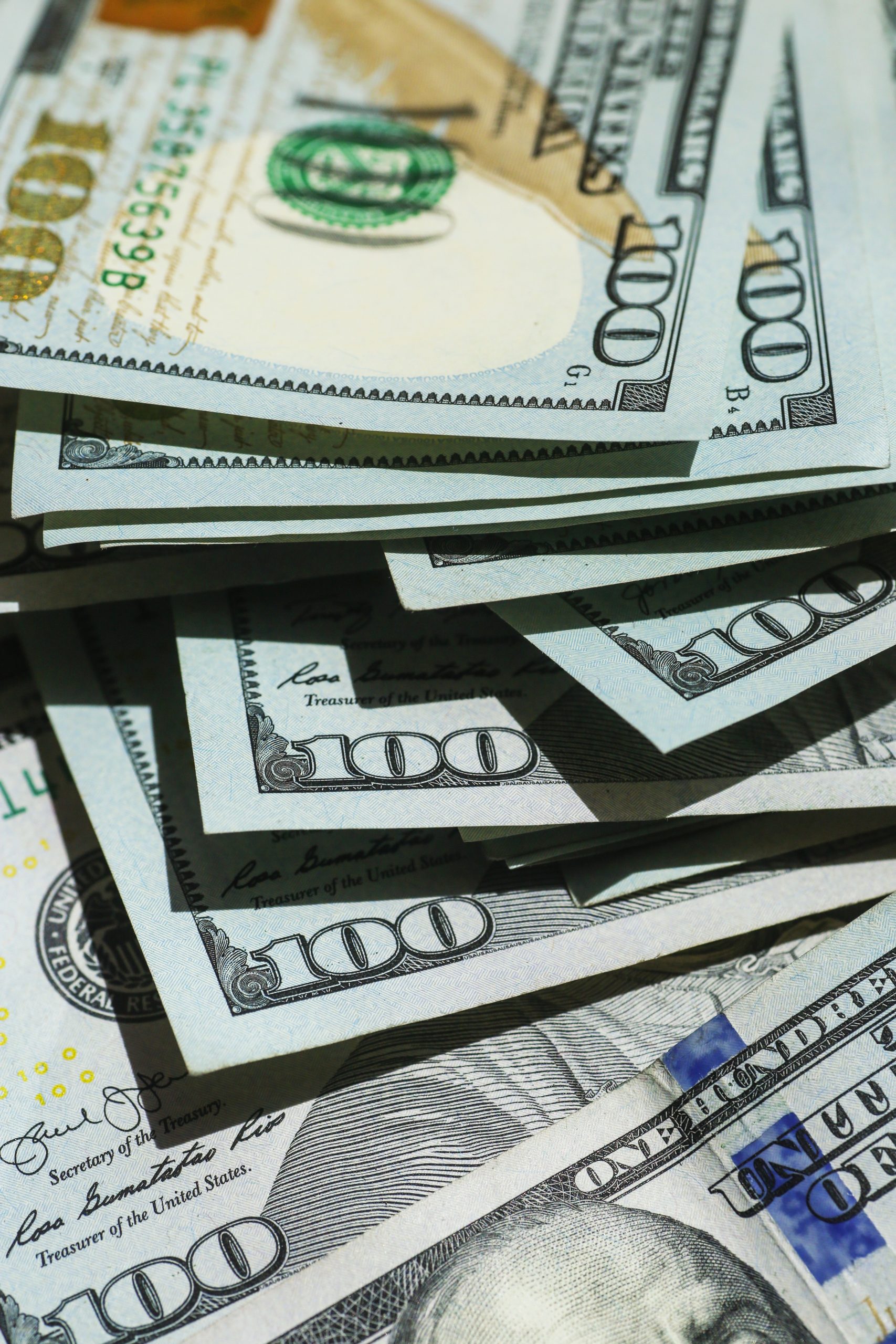 A common variation on this model is for the achievement of a higher rate of return to activate a new split which becomes more favorable to the sponsors. This makes it advantageous to the sponsors to get the deal to perform as well as possible — in which case everyone makes more money!

A further variation might include a standard 70/30 split for the cashflow distributions above the preferred return rate, but a multiple-tiered waterfall on the equity growth at sale. The ways to structure a waterfall are limitless.

Some investors who are used to a straight split aren’t comfortable with waterfall deals, mainly because they’re not used to them. But if you think about it, the general partners aren’t likely to offer a deal with a waterfall structure if they expect to make low returns, because the profits wouldn’t be beneficial to them. Because of this, waterfall structures are really a win-win. The general partners are incentivized, and you get preferential treatment for the first 7% (or whatever it is for the particular deal) before the general partners get paid! It aligns the sponsors’ interests with the passive investors’, and is the closest thing to a guarantee in investing (it’s not one, however).

How to Choose the Best Real Estate Syndication Structure

Neither type of deal structure — straight split or waterfall — is actually better than the other. The choice completely depends on the deal itself, the deal sponsors, and your investment goals. At the end, it’s a risk-return issue.

Many investors love the preferred return option because it feels a little like a guarantee. However, preferred return (waterfall) deals might offer more conservative returns, depending on the deal’s overall performance.

When the Waterfall Structure is Better

When a property has high cash flow percentages for distribution, a waterfall structure provides higher distribution amounts to the limited partners, while a straight split provides more value to the general partners.

However, the flipside of this is that there’s greater certainty of good cashflow distributions with a waterfall.  Say, for example, that instead of achieving a 10% return, the project struggles, barely meeting 7%. Well, with a waterfall, you’d still get $7,000, and the sponsors wouldn’t get a dime. But with an 80/20 straight split, you’d only get $5,600, and the sponsors would still get their 20%.

A waterfall might have lower cash on cash returns than a straight split when the deal performs well, but higher returns when it doesn’t. But of course, it depends on the prefered return rates and thresholds for any changes.

When the Straight Split is Better

If your personal investing goals are short-term in nature or center on passive income, a deal with a preferred return (waterfall structure) might better suit your needs since greater cash flow distributions throughout the project lifecycle are likely, and the distributions have lower risk based on the deal’s performance. The caveat here is that you may see lower returns when the asset is sold. Cash investors (not using retirement money) are likely to be drawn to this option since the ongoing cash flow distributions are quite attractive.

However, if your investing goals are more long-term, and you’re more focused on capital appreciation (the profits at sale), you might be more interested in deals with a straight split since they’re likely to provide you a larger percentage of profits at the exit. Investors utilizing a self-directed IRA might fall into this category since cash flow distributions are untouchable until retirement anyway.

No choice is wrong, just different. It all comes down to your goals and where you’re more and less tolerant of risk. Different people with different goals in different situations are going to choose different deals. There’s money to be made in real estate syndications with either type of structure.

As usual, there are many factors to consider, and you should always start with your goals in mind.

Further reading: STOP!! Know Your Goals Before Investing in a Real Estate Syndication!