Understanding the Capital Stack in a Real Estate Syndication 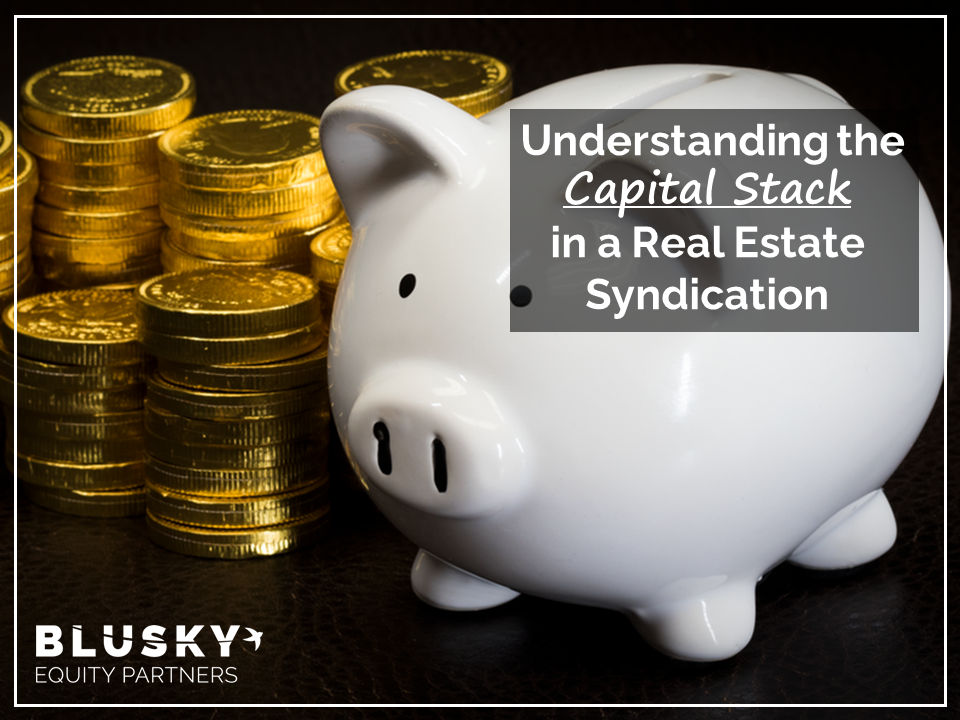 The order in which profits are paid in a real estate syndication deal is called the capital stack. Understanding this concept is very important because you need to know where you fall in the order of returns. If you invest at one level (let’s call it Class B, though that doesn’t always mean the same thing), and another level of investors (Class A) are a higher priority to receive distributions, you’d want to know why, right?

Understanding how returns are paid in a real estate syndication will also help you select deals to invest in where the capital stack is favorable toward your investing goals. Your knowledge of the risk and priority at each tier is a vital piece of knowing why and when you’ll receive distributions.

Inside, I’ll share what the capital stack is, why it’s essential, and how it impacts you.

The structure of each deal’s returns is outlined in the PPM (Private Placement Memorandum) at the beginning of the deal. It explains who, how, and when
each partner, whether general or limited, gets paid during the real estate syndication deal.

Some classes may receive only cash flow (without equity), while others participate in both cashflow distributions and profits from equity growth when the property is refinanced or sold. So you want to understand where your potential investment is in the return structure (i.e., waterfall) and know which pieces apply to you and how they might help you toward your financial goals.

As we explore the types of structures and styles, keep two things in mind:

The cash-on-cash return is the before-tax earnings an investor makes on their invested capital, also referred to as cash flow or distributions.

The IRR is a metric to measure the deal’s profitability (both cash flow and return of equity growth). It’s a fancy way of calculating your return while accounting for the time value of money, a concept that holds that today’s money is more valuable to you than what’s returned to you in the future. Another way of looking at this is that a certain amount of money returned after two years is more valuable – so would have a higher IRR – than the exact same amount would be if it’s returned after
eight years.

Velocity is your ability to invest in more deals at a faster rate. As an example, when a deal gets refinanced, you may get some capital back, which you can take and invest in another project. This way, you’re effectively getting returns on two real estate syndication deals when maybe you only had enough for a single deal to begin with.

As an investor, you always want to do your own research on the property and vet the sponsor team. You also definitely want to know who gets paid what and when each payout is supposed to happen. It’s nice to know what to expect and be utterly comfortable up front so there’s no confusion as to when you’re getting paid, right?

The different categories in the capital stack are described below, along with charts showing examples of common deal structures.

At the top, you’ll always have the senior debt. This is the largest mortgage/loan used to finance the property, and may be an FHA-backed loan (i.e., Fannie Mae or Freddie Mac, also called “agency” loans), a bank loan, a bridge loan, etc. It’s often non-recourse debt. Just as you’d never miss a house payment, the senior debt is the highest priority, and they get paid first — or they can foreclose on the property. These loans typically have a meager rate of return (roughly 2-5% interest for the past few years, depending on which type of loan) in exchange for being top priority, or “first position.” 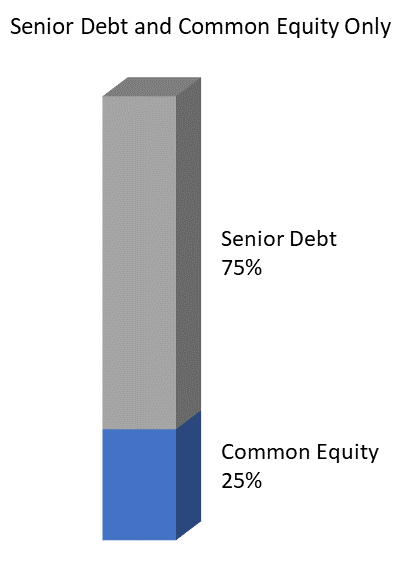 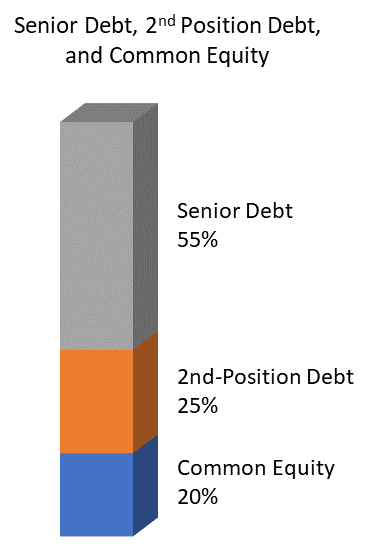 Next, there may – or may not – be a second-position loan, such as mezzanine debt or a supplemental loan. These are also debt positions and are ranked as a higher priority and lower risk than our limited partner (LP) and general partner (GP) investors, but lower priority and higher risk than the senior debt

There may be a higher minimum investment required from LPs at this tier, as well as limited positions available. Preferred equity investors typically get a higher, fixed-rate preferred return (cash-on-cash returns) than investors further down the waterfall, which can lead to higher velocity. However, they have lower IRR since they don’t share in the equity growth.

Why would an investor want to invest in a preferred class of equity?  Well, while there’s never a “guaranteed” return for equity investors, the fixed return rate and being in a higher position than the common equity investors (i.e., getting paid first) gives them greater assurance and predictability, which translates as lower risk. After the mortgage, expenses, and fees are paid, preferred investors basically have “dibs” on distributable cash flow up to their specified amount. 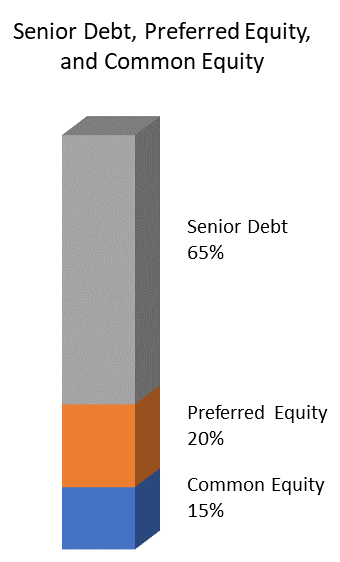 Why would general partners want to use this class in a deal structure?  Simple – since preferred equity doesn’t share in the equity growth, it has a lower cost of capital than common equity. This class actually lowers the project’s overall cost of capital, which increases the returns from equity growth at sale for the common equity LPs and the GPs. In other words, it’s an IRR booster for the common equity LPs and GPs!  Using preferred equity, whether institutional or a class of investors, can help investors get stronger returns on a deal that wouldn’t meet their criteria using senior debt and common equity only

After preferred equity comes the common equity LPs (i.e., regular passive investors); these investors share in both the cash flow and equity growth when the property sells. However, the cashflow distributions aren’t fixed the way they are for preferred equity LPs. Also, they’re priority compared to the sponsors (i.e., GPs) depends on whether the deal’s returns are structured as a straight split or a preferred return.

In a straight split, the common equity LPs and the GPs get paid together according to the split ratio listed in the PPM – for example, 80% of profits going to the LPs and 20% to the GPs, commonly called an 80/20 split.

But with a preferred return, the common equity LPs have a higher position than the GPs. They get 100% of the cash flow left after the higher tiers are paid — up to the specified preferred return rate (typically 7 or 8% cash-on-cash return). Then they share in any cash flow or sales profits above that according to a split ratio – for example, 70% to the LPs and 30% to the GPs.

However the deal is structured, common equity LPs typically receive lower cash-on-cash returns (which might mean lower velocity) but a higher IRR than preferred equity investors because they get to share in the equity growth profits when the deal sells.

The GPs are not technically part of the capital stack (that’s why they’re not in the charts) since their share comes from the work they put into the deal, and not from capital invested into it. They’re probably investing capital too, of course, but those investments are either common or preferred LP equity, so they get paid for those investments just like the rest of the LPs, in addition to their GP share for the work they do. The GPs have the highest risk and the lowest priority for payout. But they also have an opportunity for higher profits due to all the work they do to structure and run the investment, which makes it totally worthwhile.

One last note is that with either a straight split or preferred return, the GPs might structure the deal so that exceeding a specific performance goal results in the GPs getting a higher percentage above that point. For example, when a deal sells, after investors’ principal is paid back, the remaining profit might be shared at an 80/20 split up to a 16% IRR benchmark, and profits exceeding that threshold shared at a 70/30 split. This is the “waterfall,” and it incentivizes the sponsors to make the deal perform as strongly as possible, in which case everybody wins!

Related article: Syndication Structures – What They Mean for YOU as a Passive
Investor

As always, the capital stack and the return structure are outlined in the PPM (private placement memorandum) and investment summary, and they’re available to you as a potential investor before you commit to the deal. But the PPM details might seem like gibberish if you aren’t clear on the capital stack, how it works, or where you fall in priority for distributions.

Now that you have a solid explanation and a few examples, your confidence in reading a PPM and investment summary and selecting a real estate syndication deal that’s aligned with your investing goals will skyrocket!

Further reading: How to Review a New Investment Opportunity in Less than
10 Minutes